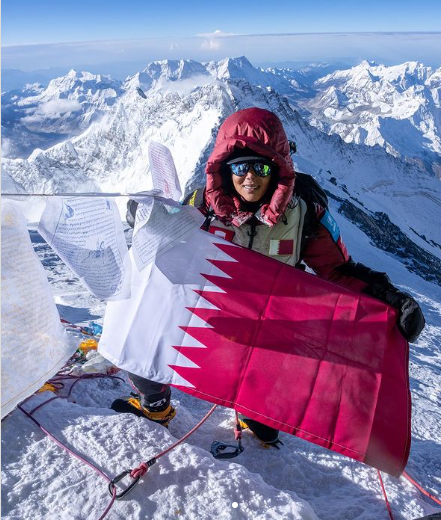 On May 27, 30 minutes past 6 o’clock in the morning, a historical achievement has been made by Sheikha Asma bint Thani Al-Thani as she became the first Qatari woman to reach the summit of Mount Everest, raising Qatar’s flag on Earth’s highest peak at 8,849 metres above sea level.

“Everest- A dream I have been working on for quite some time,” she captioned in an Instagram post.

On May last year, Sheikha Asma had also attempted to summit Mount Everest but had to cancel the expedition due to extreme weather conditions which deemed the mountain unsafe to climb.

This time around, she has shared a photo raising the flag of Qatar on Earth’s highest mountain peak.

“Don’t be shy to dream big. Once you do, you have a commitment to do everything you can to make it happen. Where there is a will there is a way!,” she said on Instagram.

She also spoke about perseverance and the pursuit of dreams as she shared that Mount Everest has “taught me that no matter the struggle, what you want and how much you want it matters”.

In the same post, she paid tribute to the people who were a part of her journey as well as those who have given support in reaching this new height.
Comments of cheer and congratulations poured in the comment section of the Instagram post.

Sheikh Mohammed bin Abdullah Al Thani, the very first Qatari to reach the peak of Mount Everest and all the seven summits in the world, also left a congratulatory comment on the post.

Qatari climber Fahad Badar, the first Arab man to double summit Mount Everest and Mount Lhotse in one trip, also congratulated her on the new feat.

“Proud of you our Superhero A new historical achievement,” said Qatar Olympic.

This marks back-to-back historical achievement for Sheikha Asma as she also became the first-ever Arab athlete to reach the summit of Mount Kanchenjunga just three weeks ago.

Unlocking this legendary feat brings her closer to her goal in becoming the first woman from the Middle East to complete the Explorers Grand Slam, which involves climbing the Seven Summits and reaching the North and South Pole. To date, Sheikha Asma has completed seven out of nine of the Explorers challenges.