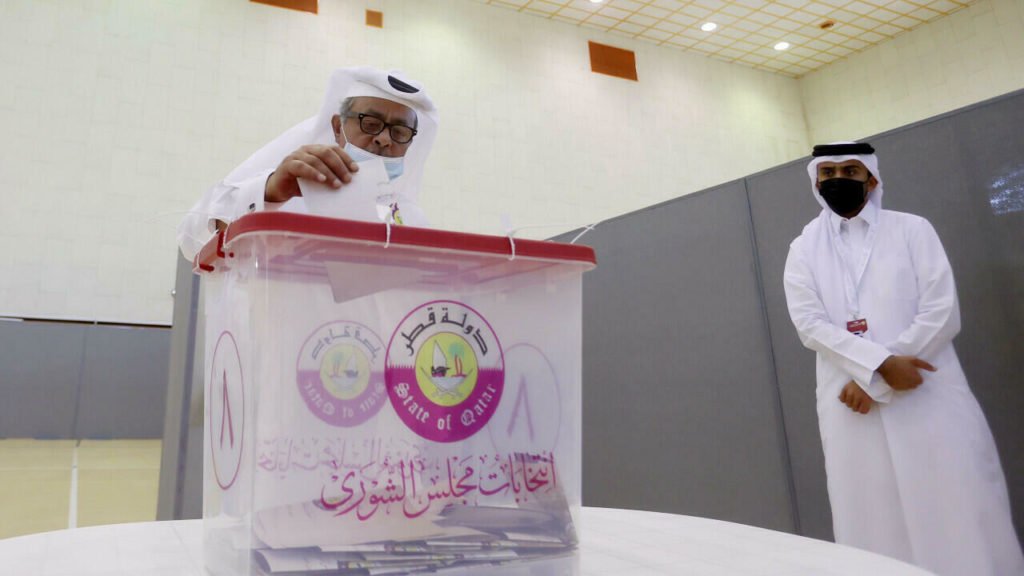 Qatari citizens voted in the country’s first ever Shura Council elections yesterday, which witnessed a voter turnout of 63.5%.

Chairman of the Supervisory Committee for the Shura Council Elections, Major General Majid Ibrahim Al Khulaifi announced all 30 winning candidates in a press conference late yesterday. He said the voter turnout in the election stood  at 63.5 percent.

The Ministry of Interior said in a statement: “In realisation of the vision of Amir H H Sheikh Tamin bin Hamad Al Thani, as announced in his speech at the opening of the 49th session of the Shura Council last year, the first legislative elections to pick the members of the elected Shura Council took place today, Saturday, October 2, 2021, under the direct supervision of H E the Prime Minister and Minister of Interior. These elections will strengthen the rule of law and institutions of the country.”

The citizens were keen to show the spirit of responsible citizenship and the national duty of effective participation in this historic event, the Ministry said. “It as well denotes their commitment to the established values ​​and inherited traditions of Qatari society.

“The Ministry of Interior commends the high patriotic spirit that prevailed on polling day and the efforts made by all national entities and cadres for their effective contribution in organising this national prerogative under constitutional and legal guarantees within a neutral and responsible environment.”

Voting continued uninterrupted from 8am to 6pm. The polling day also saw the participation of a large number of women voters.

The voting was held at 29 polling stations out of total 30 constituencies as Constituency No. 5 candidate was contesting unopposed.

Out of 234 candidates vying for the 30 seats, 30 winning candidates were announced in a preliminary result last night after counting of votes in the presence of representatives of contesting candidates in all constituencies.

The voters started reaching polling stations as early as 8am to go through a well disciplined, safe and efficient voting procedure.  The voting process was fast and smooth, taking a few minutes from verification of the voter to collecting ballot paper and casting the vote.

Many voters had reached even before the opening of the polling stations.

Security personnel from the Ministry of Interior and volunteers from Qatar Red Crescent Society were deployed in adequate number to ensure a smooth election procedure. The voting was held in large halls separately for men and women.

Following the election procedures, the voters first showed their green status on Ehteraz app at the entrance to the polling stations, and  then headed for verification where they got a slip to obtain their ballot paper from another counter.  Dedicated corners were made for voters to cast their votes secretly. An area was dedicated for candidates where they can sit and observe the voting process.

To ensure transparency, before starting the voting, the election officer called candidates to check the ballot boxes are empty and then they were sealed in front of them. Sanitisers were mounted at places so voters and management can sanitise their hands.

Chairman of the Board of Directors of Dar Al Sharq Sheikh Dr. Khalid bin Thani bin Abdullah Al Thani casting his vote at a polling station for Constituency No 17. Pic: Salim Matramkot/The Peninsula

Describing the Shura Council elections historic and a generous gift from H H the Amir, the voters said that it will bring positive changes in the life of people.

“The arrangements for voting process are excellent. It took only a few minutes for me to cast my vote. It is a very impressive moment for me to participate in this great event, the first election of Shura Council,” Mohamad Mansour, a voter in Constituency No. 17, said.

Qataris wait to cast their ballots at a polling booth during the Shura Council elections yesterday. Pics: Abdul Basit/The Peninsula

He said voters expected from their candidates to play their roles in further improving services for them such as healthcare and education.

Rashid Mobarak Al Abdallah, another voter, praised the smooth polling process. “As a Qatari citizen, I am proud to be a part of this election. I expect from my candidate a lot of things such as addressing issues of pension and further care for widows.” To a question about the election campaigns, he said the candidates ran good campaigns in terms of addressing the issues of people.

Faisal Al Abdallah, another voter in Constituency No. 17, said the voting process was very efficient. “It took few minutes from verification to taking ballot paper and casting the vote. It was a great arrangement,” said Abdallah. He said the first Shura Council elections was a generous gift from H H the Amir which allowed people to elect their candidates to raise their voice.