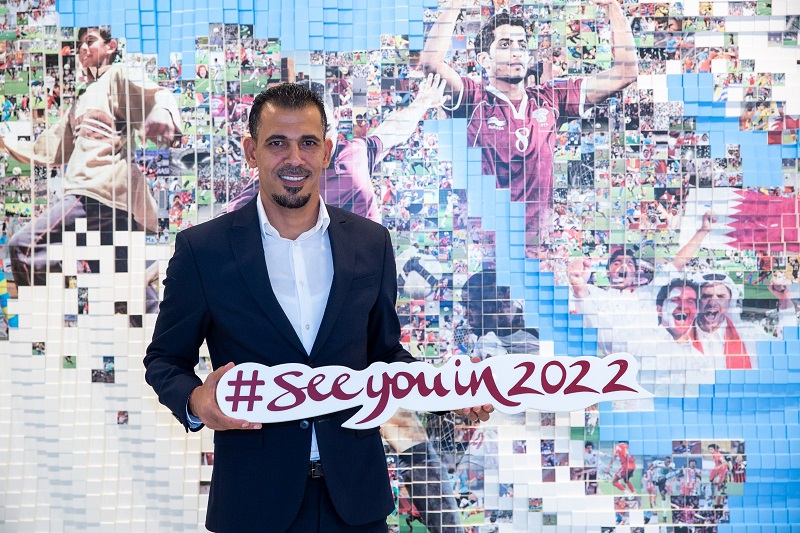 Iraq’s legendary captain Younis Mahmoud understands football’s power to unite millions of people. When he led the Lions of Mesopotamia to Asian Cup glory in 2007, the team’s victory played a crucial role in promoting peace throughout the war-torn country. Mahmoud captained Iraq for ten years during a career that earned him 148 international caps and a reputation as one of the greatest strikers in Asian football history.

Although Mahmoud never led his team to the FIFA World Cup™ finals, he continues to work closely with the football family in Iraq to better prepare his national team to reach Qatar 2022. For Iraqi fans worldwide, appearing on the global stage is an elusive dream for an entire generation that is too young to remember the country’s last World Cup appearance in Mexico in 1986.

On a club level, Mahmoud spent many years in the Qatar Stars League, representing the competition’s top sides and winning several accolades, including top scorer several times and winning the league title three years in a row with Al Gharafah. His knowledge of Qatar’s football culture and his involvement with Qatar 2022 as an ambassador for the Supreme Committee for Delivery & Legacy (SC) gives the talismanic striker strong insight into what the FIFA World Cup Qatar 2022™ will mean to fans in the region and beyond.

With just under two years to go until the big kick-off, the SC recently got caught up with Mahmoud to talk about the tournament, its legacy and some of its unique characteristics.

How important is it for the Middle East and Arab world to host the FIFA World Cup™ for the first time?

It will provide a much-needed opportunity for the rest of the world to rid themselves of the many negative stereotypes they have about the region. By experiencing both Arab culture and the world-class infrastructure that will be in place for the tournament, fans from different countries will have the opportunity to reimagine the way they see this part of the world. As with all World Cups, Qatar 2022 will allow fans from all over the globe to meet, learn about different traditions and celebrate the beautiful sport at a time when so many people have suffered through this pandemic.

What impact will Qatar 2022 have on football in the region?

It will undoubtedly raise the level of ambition for all Arab countries, both on and off the pitch. National teams will be even more encouraged to compete at a higher level, particularly after the world’s most important football event takes place in their own region. Off the pitch, football authorities will compete to host more global sporting events, investing more in building the necessary infrastructure and local capacities to do so. Either way, Qatar 2022 will prove to be a watershed moment for millions of football fans across the Middle East.

With the furthest stadium being only 46km from Doha city centre and the closest a mere 7km away, Qatar 2022 is set to be the most compact version of the World Cup in modern history. What impact will that have on fans and players?

This unique feature was something that tournament organisers promised the world from the outset of the bidding process in 2010. It’s one of the many ways that Qatar 2022 will be a unique tournament that will set the benchmark for all World Cups moving forward. Giving fans the potential of attending more than one match a day in person will change the way fans interact with the World Cup. Whereas in the past, fans had to usually travel long distances between stadiums, Qatar will offer a highly connected experience, with fans always being close to tournament venues, fan zones and cultural sites. The result will be a month-long festivity that will be remembered for a lifetime.

From a player’s perspective, having spent years traversing the expansive Asian continent with the Iraq national team, I can tell you that being able to stay and train in one base camp throughout the tournament is something that all participating teams are looking forward to.

In 2022, the World Cup will take place between 21 November and 18 December. What will that mean for those both attending and participating in the tournament?

Having lived and played in Qatar for many years, the temperatures at that time of year are ideal for football. When combined with the availability of innovative cooling technology at stadiums, the weather will not play any adverse role whatsoever. More importantly, perhaps, will be that this World Cup will come in the middle of the European domestic season, where most of the world’s top footballers play. This means that they will be at the peak of their fitness as opposed to being fatigued from a lengthy season. This will surely mean that fans will be treated to some exceptional performances, making the tournament even more memorable.

Tell us about your work as an ambassador with the SC, which is tasked with tournament preparedness and fan experience for Qatar 2022. How important is that for you as a former player from the region?

It’s an honour both for me and Iraq. Having the opportunity to play a role in delivering the first World Cup in our region is a tremendous experience that hopefully will leave behind a fruitful legacy for generations to come. Seeing first-hand the level of detail and commitment to sustainability and excellence that goes into every aspect of preparation is something that fills all people from the region with pride. Over the years, I have been able to witness the way football has been a transformative force in Qatar and throughout the region. I also know that this process of change will continue to unfold long after the tournament ends through the many legacy programmes that have been put in place by the SC.

You have played in several World Cup qualifiers with your country Iraq. What does the tournament mean to you as a player, and also as a fan?

Although I was never fortunate enough to qualify to the finals of the tournament, having played in qualifiers and as a fan of the World Cup myself, I can tell you that it is a tournament that occupies a very special place in the heart of Iraqi fans around the world. It is the dream of every player to partake in the World Cup, and the wish of every fan to cheer for them on the biggest stage. As a former player, I continue to support the dream of millions of Iraqi fans to see their team in the World Cup by working closely with the football family in the country to put in place the necessary groundwork for us to qualify to Qatar 2022.

More broadly, as a fan, I want to see the continued success of Arab teams in the tournament, hoping that we can see a side from the region make it to the latter stages of Qatar 2022.

Finally, what is your favorite Qatar 2022 stadium and why?

They’re all beautiful and unique in their own right. Personally, Al Janoub Stadium is my favourite because of it being located in Al Wakrah, a city that I played in for a long time when I was with the Qatar Stars League. And of course, because the stadium’s concept was designed by Dame Zaha Hadid, a fellow Iraqi.