In order to ensure the highest levels of security and tranquillity for all spectators during the 2022 World Cup, a center of International Police Coordination Center (IPCC) was established in Doha, with an operating room managed and supervised by the Security Committee of the Supreme Committee for Delivery and Legacy. It has been provided with the latest advanced technological means and the necessary infrastructure in order to perform its role and achieve its goals. 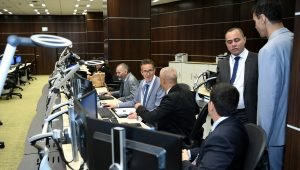 A group of young Qatari officers with distinguished skills were also joined to the center. The center started working with the start of the 2019 FIFA Club World Cup, which is currently held in Doha, and it works to exchange information between representatives of the international police and the State of Qatar in order to exchange information and manage crises. During the Club World Cup, a number of police representatives from countries with participating teams were joined to work together with Qatari police officers. The Center has a prominent cooperation with the International Criminal Police Organization (Interpol).

On the tasks of the center and how it works, First Lieutenant Hamad Al-Nasr, assistant commander of the center, said that the center includes a group of qualified young cadres representing the concerned departments that operate under the umbrella of the security committee. During the Club World Cup Championship, the center was activated with the aim of enhancing capabilities and identifying mechanisms for joint action as the liaison officers from the external police agencies were brought in from the participating countries of the tournament, such as Brazil, France, Mexico and Britain, to provide expertise and assistance in dealing with fans coming from these countries to attend the Club World Cup. The Center focuses in managing the situation if the encouragement deviates from the sporting spirit, and adopts inappropriate or anti-racist slogans, whether political, social or religious that would incite fanaticism.

He explained that the information and observations that are monitored, through surveillance cameras or through the direct presence in the galleries or the fan zone area, are transferred directly through the center to the operations center. It analyzes this information and observations, and communicates with the leaders of sports facilities to coordinate with them and take the necessary measures towards it.

He pointed out that the IPCC center includes a group of distinguished officers, each of whom is responsible for one of the center’s units, such as the logistic support unit, the Interpol unit, the information unit, and the technical support unit in addition to the technical equipment and the “Talaa” program.

He said that the participating officers from abroad, that include twelve officers, are analyzing and following up what is being published in their countries, through social media sites, such as Twitter, Facebook, Instagram and others. This works to reinforce assumptions and assess the possibilities about the actions of the masses from these countries, in order to support our decision and enable us to anticipate the event.

First Lieutenant Hamad Al-Nasr said that some of these officers carry lists of names for rioting fans, which were included in the airports databases, in addition to providing us with information and experiences about the customs of the coming masses, their special methods of encouraging and celebrating, and even expressing resentment and anger. They are ready to deal with fans from their countries in the event of overtaking security measures.

He said that the fans zone area includes a miniature operating room of the non-competitive unit, whose officers follow the movement in the area. The fans who do not have tickets to enter the matches can view them through the external devices, and express their joy away from the stadiums.

On the other hand, a number of liaison officers, who came from abroad, clarified the nature of their role and tasks entrusted to them in the framework of cooperation with the IPCC Center, Mr. Bruno Albuquerque, Federal Commissioner for the Brazilian Police and an INTERPOL member from Brazil said that he came to Qatar in order to participate in the IPCC, which was launched in the State of Qatar, and working to bring information from Brazil and about the fans rioters in the stadiums.

He expressed his great admiration for the technical facilities of the center, which excels when compared to the center that was held in Brazil during the tournament there, noting that most of the fans coming from Brazil from moderate environments, and their main concern is watching football, not raising problems.

He said that he can help provide awareness to the Brazilian fans, and introduce them to the nature and customs of the traditional Qatari people, which is not expected to disturb the major sporting event.

On how to provide security support for the Club World Cup held in Qatar through her presence in the center’s work team, Ms. Rodrigues, criminal investigator at the Federal Ministerial Police to Combat Crime in Mexico, said that by virtue of her knowledge of the nature of fans in Mexico, she expected them to respect the traditions and customs of the host country.

She said that the Qatari embassy in Mexico played a great role for making the fans coming to Doha aware, in order to introduce the Qatari customs and traditions regarding the style of dressing and the ways of expressing their emotions while watching the matches.